The earth is all we have in common

Iceland, and all it has to offer, features on many a bucket list. We decided that it was about time to cross it off of ours! With its cinematic landscapes and natural wonders aplenty, planning our trip was not a challenge.

On arrival at Keflavik International, we jumped on a transfer to Reykjavic with Reykjavik Excursions. Super easy and free wifi.

Once we’d check in at our apartments, snow boots and thermals on, we were off. Sadly our northern lights trip was cancelled, due to cloud, but we were able to book onto tomorrow night’s trip – free of charge.

Now, I’m a sucker for Christmas lights, so Reykjavik in all it’s magical Scandinavian beauty, did not disappoint! I will be searching for the stars in every window for the next three days.
We stayed at the Rey apartments, in the heart of Reykjavik’s main shopping and eating district. Most of the streets are either pedestrianised, or traffic is slowed to an almost walking pace. As daylight in December is limited, we arrived around 4.00pm in darkness, so we scrapped some of our afternoon plans, in place of my favourite city break pass times – wandering around in any old direction.

Since a tiny age, for some unknown reason, I have been obsessed with puffins. Therefore, I was in heaven, this truly is puffin land. I have never felt the need to purchase a carved, wooden backscratcher – however one with a puffin on the end? Just what I’ve always wanted.

We ate at Sólon Bistro, where a burger and chips will set you back about £11 – fairly reasonable. Luckily, we caught the end of happy hour, so the beer wasn’t too bad either.

Today was all about experiencing the blue lagoon. Now a lot has been said about how ‘commercialised’ and busy the blue lagoon is, but it’s one of those places that you need to make your own mind up about.

We wandered to the very cool Reykjavik Roasters to grab a quick bite and flat white, before heading to  the iconic Hallgrimskirkja – The white concrete church, named after the poet Reverent Hallgrimur Pétursson. As sun rise was not until 11.21am, we took the lift to the tower (1600ikr) and looked out over the beautiful lights of the city.

We booked our transport to the Blue Lagoon through Reykjavik Excursions and were at our  in an hour. It was, as expected, extremely busy and the changing rooms were full. I had read about an expectation of ‘showering in your birthday suit’, and I’ve got to say, it kept me awake slightly during the night. Luckily though, there were cubicles with doors, and no scary scandernavian woman watching over you with a cane (as several tripadvisor reviews made out). I did however struggle with the lockers, which locked when you pressed your wristband over a sensor. I managed to pick a locker that didn’t shut properly and had to ask a poor old lady to hold the door shut while I reached over to the sensor.

Once through the shower section, we decided to hang our robes and towels outside. This was a stupid decision. It was snowing. There are a number of hooks inside, where your robe and towel will stay nice and warm – although don’t automatically expect to take the exact same towel when you get out – there seemed to be a slight pass the towel around situation going on.

With the package we bought, we were entitled to a free drink from the lagoon bar, which is redeemable with your electronic wrist band. I’ve got to say, I loved it! I had read scathing reviews of the whole experienced ruined by factories in the background and huge crowds. The website was very honest about the building work taking place, but even that did not spoil it for us. The steam, teamed with the blizzard we found ourself in, meant it was hard to see three metres in front of our faces. Selfie-stick-dicks were few and far between, and the novelty of sipping an ice cold beer, in a hot lagoon, in the middle of a snow storm did not wear off.

The only downside? The changing rooms stressed me out, but that’s more of a weird me thing. They were very clean, spacious and stocked with cotton pads and buds, hair dryers and every other ammenity you could need in that situation. Also, shock horror, the price of the food (gasp). We were pretty starving after a couple of hours bobbing with a beer, but a sandwich each, packet of crisps and drinks for £25? Come on. 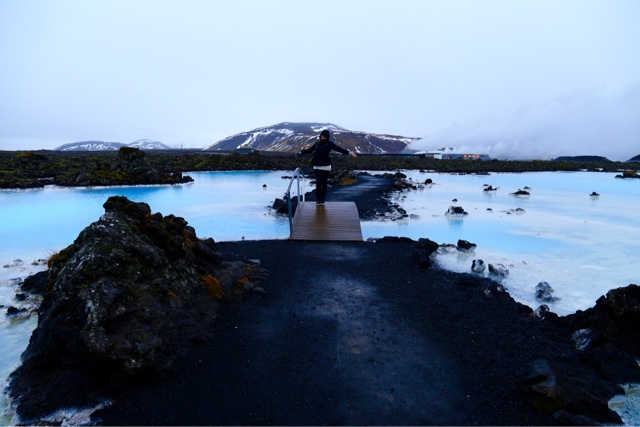